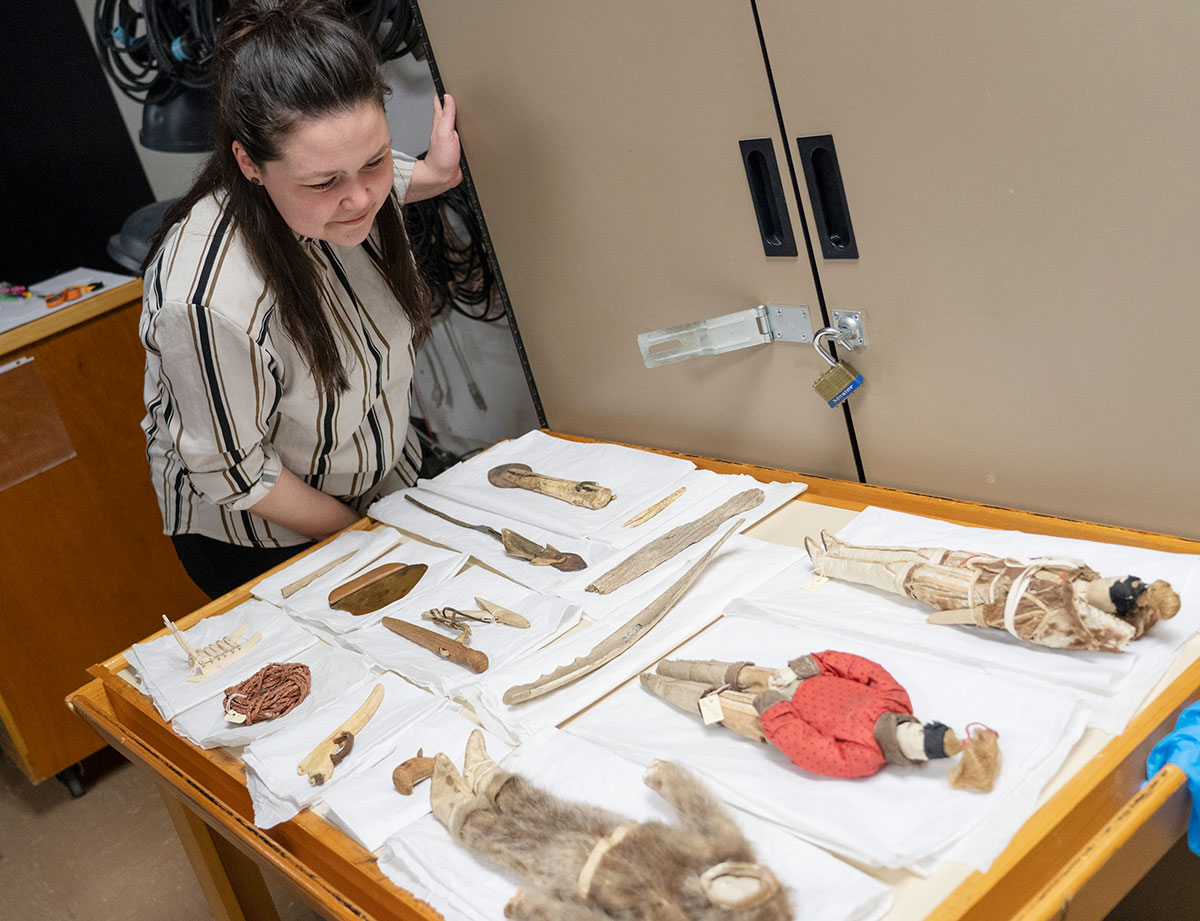 LAWRENCE – Objects made by Greenland Inuit people and collected by the so-called “Dashing Kansan,” naturalist and adventurer Lewis Lindsay Dyche, in the 1890s will return to their place of origin – or at least three-dimensional copies of them will – as the result of a visit last week by Greenlandic researchers to the Spencer Museum of Art.

Two graduate students from the University of Greenland, Aka Bendtsen and Randi Sørensen Johansen, accompanied by curator and archaeologist Hans Harmsen of the Greenland National Museum and Archives, arrived April 14 and spent a week making 3D digital images of a group of objects, including dolls dressed in authentic and highly detailed miniature Inuit clothing, points from harpoons and lances, and a knife with a stone blade known as an ulu.

The national museum has only a single stone-bladed ulu, Bendtsen said.

“I almost cried to see these objects,” Bendtsen said. “To me, they are rare. Before, I had not seen any arrows, real ones, in one piece like this.”

Harmsen explained that the two students began a project to digitally reunify Greenlandic objects held in museums around the world in 2016. Other than the Smithsonian, the Spencer Museum is the only North American institution with which they have collaborated.

Harmsen said the first goal of the project – called Ersersaaneq, meaning “creating knowledge through images” in Greenlandic – was to create 3D images of objects from the famous collection of 19th-century Danish explorer Gustav Holm. Holm visited the east coast of Greenland at about the same time that Dyche traveled to the west coast. Holm’s collection was split among museums in Denmark, Greenland and the Smithsonian Institution.

“They originally wanted to do this because the collection was split among various institutions, and they wanted to digitally reunite them in a context that was unavailable before – in three dimensions,” Harmsen said.

Bendtsen and Sørensen Johansen have taught themselves to make detailed 3D images using some fairly basic photographic techniques and software that knits the images together into what look like 3D copies of the originals. They’ve obtained grant funding to support the work, which also has the backing of Greenland’s government through its national museum.

“We are just there to support them when they need it,” Harmsen said.

It was Harmsen’s connection to Jay Johnson, professor of geography & atmospheric sciences and an affiliate of KU’s Indigenous Studies Program, that brought the Greenlanders to Lawrence. Harmsen met Johnson while attending a National Science Foundation conference in Nuuk, Greenland’s capital, last year. They discussed the existence of the Dyche collection and later learned that officials of the two museums had corresponded about it decades ago.

Dyche is the namesake of Dyche Hall on the KU campus, which houses objects from his collection in the Biodiversity Institute & Natural History Museum. His life was the subject of the 1990 biography titled “The Dashing Kansan” (Harrow Books). Dyche donated his collection to the university, which once held part of it in the former Museum of Anthropology and, since 2007, in the Spencer.

When team members from Greenland arrived this month, they set up their photographic equipment in Spencer’s photography studio and went to work, aided by curators, collections and photography staff.

“Photogrammetry is a very time- and labor-intensive process with the cameras and methods they are using,” Harmsen said. “Each object can take an hour to an hour and a half, depending on its complexity.”

The group was hoping to create at least five and hopefully more complete 3D images of Dyche collection objects to take home with them.

The Greenlanders said they were pleased to be able to bring knowledge of their nation’s heritage home in this way.

“It's absolutely an important collection and one that the Greenland National Museum has little knowledge about,” Harmsen said. “It's actually filling in some important gaps for us in terms of understanding during this period of exploration.”